Shiny is a legendary knife obtained by unboxing it from the Rainbow Box.

Shiny is a knife with a dull pastel rainbow covering the whole knife, including the handle. 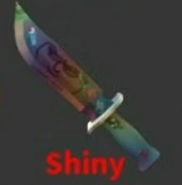