Redeem the code that comes with the Shark Seeker Nerf blaster

SharkSeeker is an unique gun obtained by redeeming a promotional code that comes with the Shark Seeker Nerf blaster. It was first announced when the toy company Hasbro announced that they would be partnering with Roblox to introduce a range of nerf blasters to popular experiences on the platform.[1] Similar to the other unique weapons (except for Corrupt), it cannot be traded to other users.

SharkSeeker is a large red gun with a similar mesh to Shark and having an altered color scheme. It is based off the real life Nerf Gun coming out, with red making up most of the gun. 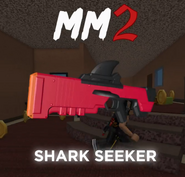 A screenshot of SharkSeeker from Hasbro's promotional video. 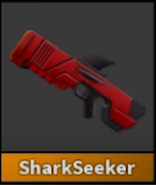 The SharkSeeker seen in a player's inventory.