The Lobby is the "waiting" or "spawning" room. A player is automatically teleported here after logging into a server or respawning after a round. This is where players may vote for maps by stepping on the gray voting panels when the maps show up on display. Players may also freely view their inventory or shop while in the lobby, purchase radios or the Elite Gamepass from the respective billboards, or spectate the round. All weapons are disabled in the lobby, and the radio is also disabled in the lobby. In private servers, players can turn on lobby mode which keeps the players in the lobby instead of starting a round, until it is turned off, which will then start the game normally.

Inside the voting room.

The upstairs area of voting room.

The secret room in the voting room.

The secret room in the voting room at another angle. 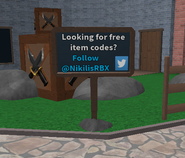 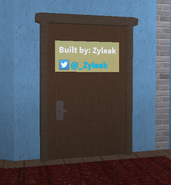 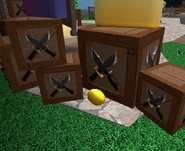 The lemon behind the Radio Billboard.

The Castle like lobby during the early days of the game

A birdseye view of the Current Lobby.

During holidays such as Halloween, and Christmas, the lobby will be changed, and will be have a theme corresponding to whatever holiday it is. 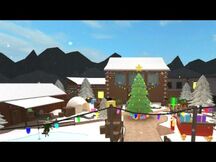