Icewing is an ancient knife that was originally obtainable by purchasing the Icewing Gamepass for 2,499 Robux during the 2018 Christmas Event. It is now only obtainable through trading as the event has since ended.

It has a thin, slightly jagged handle with a light blue grip that consists of a gradient of dark blue to cerulean. It has a diamond surrounded by icicles between the blade and handle, along with a bright blue blade made of ice in the shape of a wing, hence its name.

The sign for the Icewing Pack during Christmas Event 2018. 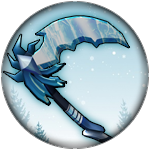