Electro is a Godly pet that was obtainable through buying the Futuristic Item Pack which costed 899 Robux. The pack also came with Godly Virtual Knife and the Godly Blaster Gun.

Electro is an electronic bird-looking pet with blue LED lights visibly seen on its eyes, chest, and upper tail. The rest of bird is a solid black with machinery parts on it. 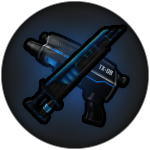