Christmas Event 2019 was an event that began on December 23, 2019 and ended on January 13, 2020. This event featured a tier event, a mystery box, a gifting center, a challenge, a leaderboard event, a lobby, new maps, and a gamepass.

There were 30 tiers in total, each one costing 600 snow tokens, with an addition of a 70,000 token reward upon completing the 30th tier.

The 2019 Christmas Box was the new box for this event. It could be opened with 600 tokens or a Snow Key.

The gifting center was where gifts were buyable for 1,000 snow tokens. These gifts were only able to be opened by other players. Inside the gift was a random item from any Mystery Box.

Giving 100 gifts would reward the player with Lugercane.

In this challenge, Saint Nikilis claims that he needs to finish off a few gifts for Christmas, and that he needs your help. 10 weapons that the player does not have will be listed (4 commons, 3 uncommons, 2 rares, and 1 legendary.) Once all weapons were obtained the player would be rewarded with Santa's Magic.

There were 2 leaderboards during this event, one for collecting tokens and one for gifts given. Spending tokens or buying tokens did not affect the total amount of tokens collected.

A new map, Workshop, was released this event. It was themed as the toy workshop of Saint Nikilis and his elves. It had unique features such as an elf morph and the elf of the year picture that displayed the avatar of the user that saw it.

Logchopper was the new ancient knife, in order to obtain it, one must have finished the Tier Event and have payed 70,000 Snow Tokens.

The first feature of the Christmas Event was the release of Eternalcane, which was obtained by buying anything from MM2Shop.

The Frostbite Item Pack was released for 1699 robux. This pack was only available during the event. 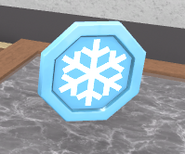